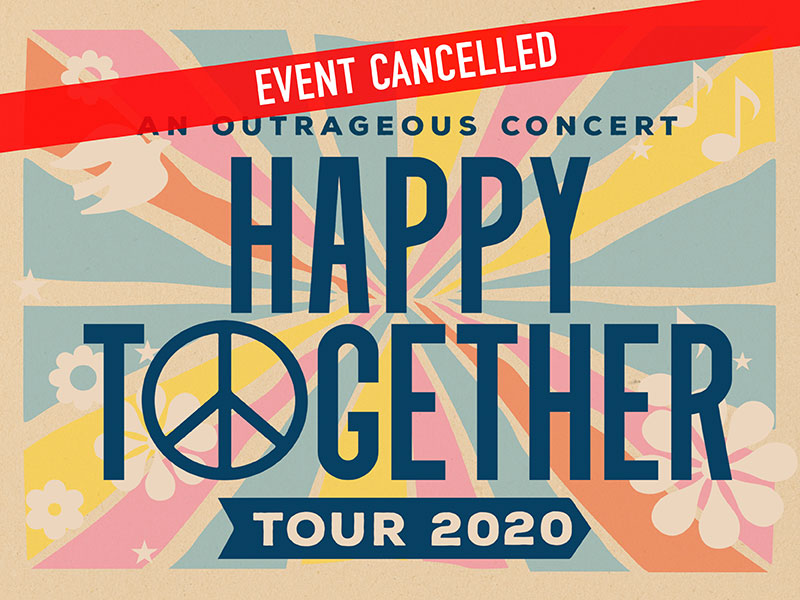 Originally postponed from their July 2020 dates, these shows have now been officially cancelled!

If  you have purchased tickets, they will be they will be returned and a full refund will be issued. Credit card purchases will be automatically refunded by original payment method starting Tuesday, April 20, 2021. Due to the high volume of refunds please allow 14 days for processing. If you paid by any other method or have any questions, please call 1-888-MAIN-ACT (1-888-624-6228).

Thank you for your understanding and we look forward to welcoming you safely soon!

One of the more popular annual outings of classic rock and ’60s pop, the Happy Together Tour, has put together an ambitious 2020 schedule with a top-notch lineup of stars who came into prominence in the ’60s. The tour is named, of course, for the Turtles’ big 1967 hit.

The rest of the lineup are: : Chuck Negron (formerly of Three Dog Night), The Association, Mark Lindsay – the longtime lead singer of Paul Revere & the Raiders, the Vogues, and the Cowsills. Together, they represent dozens of Top 10 radio hits.

The Turtles have sold over 40 million records worldwide. Their hits include: “Happy Together,” “She’d Rather Be With Me,” “Elenore,” “It Ain’t Me Babe” and “You Showed Me.”

Chuck Negron, formerly of Three Dog Night, performs some of the group’s biggest hits including “Joy to the World,” “Mama Told Me Not to Come,” “Shambala,” “One” and “Easy To Be Hard.”

The Association is one of the most popular singing groups to have come out of the ’60s. They are best known for their #1 hits “Windy,” “Cherish” and “Never My Love,” as well as the Top 10 singles “Along Comes Mary” and “Everything That Touches You.”

As lead singer for Paul Revere and the Raiders, Mark Lindsay scored hits with “Kicks,” “Just Like Me” and “Good Thing,” as well as solo success on “Arizona” and “Indian Reservation.”

The Vogues scored such Top 10 singles as “Turn Around, Look at Me,” “You’re the One” and “Five O’Clock World.”

The Cowsills have been part of the last few years of the tour. Bob, Paul and Susan Cowsill are a family singing group and the original inspiration for television’s The Partridge Family and are best known for the songs “The Rain, The Park and Other Things,” “Hair,” “Indian Lake” and “Love American Style.”

As lead singer, Ron Dante also enjoyed hits like “Bang-Shang-A-Lang” for the Archies and “Tracy” with the Cuff Links.

It’s the eleventh consecutive year for the tour.