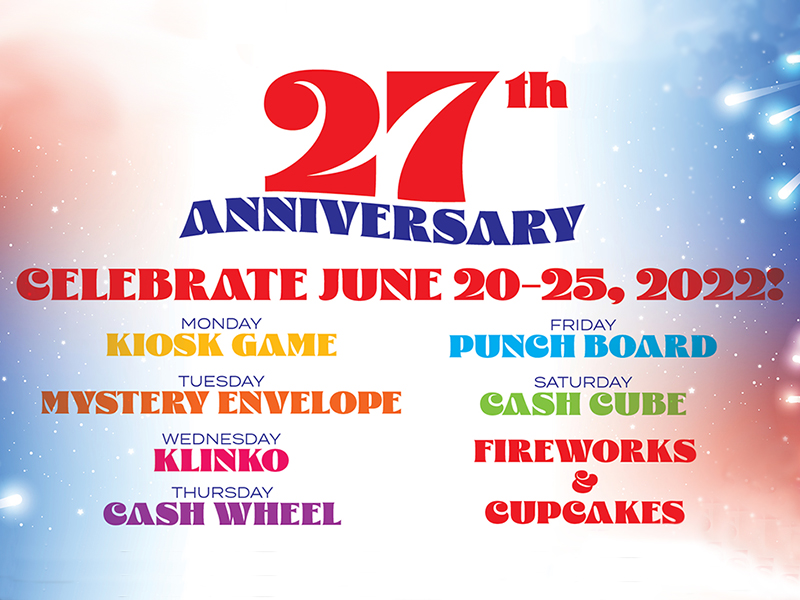 Chinook Winds turns 27 this year, so come help us Celebrate!

You’re invited to our 27th Anniversary celebration!  Enjoy a different promotion every day:

Activate your entries for each drawing starting at 4pm!

Log in to any promotional kiosk to play the anniversary game to win free drawing entries!

Gather even more entries with every 100 points earned on slots, tables, bingo, keno and sports wagering.

Complete rules at Winners Circle. Sports Wagering entries will be applied 24 hours after ticket has closed. Management reserves the right to alter or withdraw this promotion at any time.

Don’t forget to stop in the lobby on Thursday, Friday & Saturday around 1pm, so you can grab an Anniversary cupcake before they’re gone! We’ll serve in front of the Bingo Hall from 1pm-3pm, while supplies last.

And, last but certainly not least, join us Saturday evening when the sun goes down* for our spectacular fireworks display!

In May of 1995, after intense planning and three years of negotiation at the local, state and federal level, the Siletz Tribe opened a 10,000 square foot temporary facility known affectionately as “The Tent”.  With only 250 slots, 12 card tables and a small deli, “the tent” opened under the name “Chinook Winds Gaming Center”. Chinook Winds faced anti-Indian and anti-casino protests suggesting the casino would attract drugs, prostitutes and organized crime. Opposition soon dissipated when the casino proved not only to be a major economic asset to the local community without the predicted evils but a valued partner that enhanced Lincoln City’s quality of life. Just over one year later, the grand opening of Chinook Winds Casino Resort took place on June 28th, 1996.

In 2004 the Siletz Tribe purchased the ocean front hotel adjacent to the casino.  The resort offers 243 rooms including 160 oceanfront rooms; 61 of them fireplace suites. Guests at Chinook Winds hotel are just steps away from the beach and stunning sunsets.  The hotel houses a Jacuzzi, indoor heated swimming pool and workout facility, 7,500 square feet of meeting space, Wi-Fi and a complimentary shuttle to the casino which is located adjacent to the hotel.  For guests traveling with families, the Play Palace provides a supervised activity center complete with a café for meals and snacks.  For teens, the Games Galore Arcade is located right next door. Chinook’s Seafood Grill, located at the hotel, has stunning views of the ocean, a lounge with live entertainment on weekends and the perfect spot to enjoy drinks and conversation with friends around the fire pit.

The casino offers five dining options whether you’re in the mood for a quick bite or fine dining. The Rogue River Steakhouse offers a panoramic a view of the Pacific Ocean from every table. The steakhouse serves lunch and dinner featuring Pacific Northwest selections and local wines.  When the steakhouse closes for dining the Rogue River Lounge heats up on weekends with a DJ and dancing. For guests that prefer having a wide selection of items to choose from, the Siletz Bay Buffet is the place to go. The buffet has a different featured item such as Pacific Rim, south of the Border and Texas Barbeque daily and an omelet station with made to order omelets during breakfast hours. If you have a craving for ice cream or just a quick snack, the Euchre Creek Deli offers sandwiches, salads, burgers, pizza, soup and ice cream snacks.

The aesthetics at the Casino reflect the Siletz Tribe’s ownership, with the decor incorporating the beauty of nature with the symbols and traditions of the Tribe. Huge boulders harvested from Tribal land are the foundation for an indoor waterfall flowing into a pond that was designed to resemble Euchre Creek, an important cultural site to the Siletz Tribe. Coins thrown into the pond for luck contribute to the Tribe’s education fund. Painted on the exterior of the building is a weave design that pays tribute to the Tribe’s traditional basket weaving techniques. Salmon decorate both interior and exterior areas as a salute to a fish that has an important role in the history of the Tribe.

In 2005, the Resort was expanded further with the addition of a nearby 79 acre golf course, Chinook Winds Golf Resort. The 18-hole course includes a pro-shop, the only indoor driving range on the Oregon Coast, fitness center, Aces Sports Bar & Grill and meeting rooms.

For those who bring their lodging with them, Logan Road RV Park was constructed and is owned by the Siletz Tribe.  Offering fifty-one spaces, and all modern amenities, the RV Park is within walking distance of the Casino and the beach, or guests can ride the complimentary shuttle to the casino.

The combination of amenities has made Chinook Winds Casino Resort Oregon’s premier coastal destination.  The friendliness of the team members keeps guests returning time after time.

The Siletz Tribe is proud of its contributions through employment, monetary donations, and cooperative measures to the Siletz community, Lincoln County, and the state of Oregon. The Tribe has honored its tradition of sharing within the community by distributing more than $12 million through the Siletz Tribal Charitable Contribution Fund and other tribal resources. Chinook Winds has donated more than $3 million in cash and fundraising items since it opened in 1995.