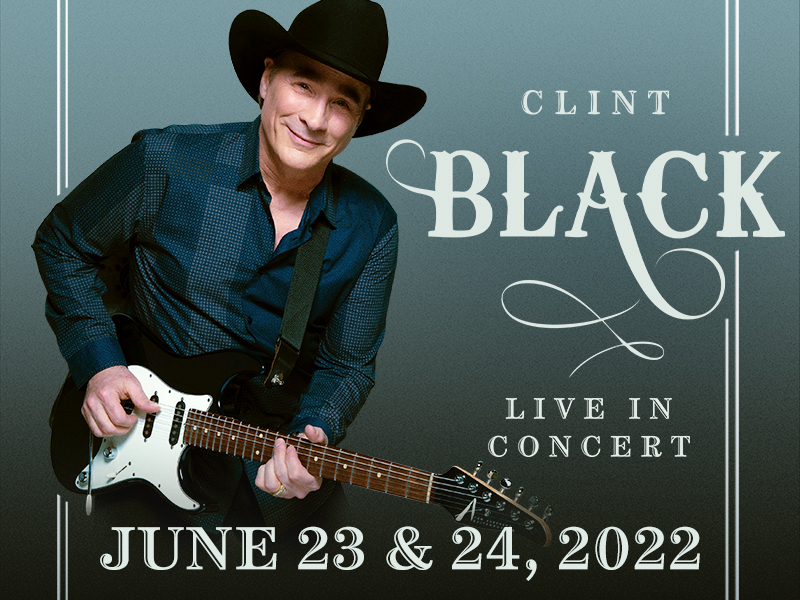 A country music traditionalist from Texas, Clint Black was one of the first artists to kick-start the mass-market popularity of country in the ’90s. Black is also one of the first artists of a generation that was equally inspired by rock-oriented pop like ’70s singer/songwriters and ’60s rock & roll as well as country artists Merle Haggard, Bob Wills, and George Jones. Born in New Jersey but raised in Houston, he absolutely tore up the country charts when he debuted in 1989 — his first four singles hit number one, and his first 24 all reached the Top Ten. Co-writing every one of his numerous hits, Black brings a highly personal style to his music that is uncommon within Nashville. A fine guitarist and producer as well, he has collaborated with artists including Roy Rogers, Martina McBride, Wynonna, Alison Krauss, Bruce Hornsby, and his wife Lisa Hartman-Black, with great success.

Black was born in New Jersey but raised in Katy, Texas, a suburb of Houston. As a child, he listened to both country and rock & roll, but he didn’t begin playing guitar until the age of 13, when he started playing harmonica. Two years later, he began writing songs, as well as performing in his brother Kevin’s band, where he played bass and sang. In the early ’80s, he began busking on the streets of Katy, eventually working his way into coffee houses, bars, and nightclubs.

In 1987, Clint met Hayden Nicholas, a guitarist and songwriter who had a home studio. Nicholas and Black began collaborating together, writing songs and recording demos; Nicholas would become the bandleader for Black, playing lead guitar and co-writing a large majority of his hit singles. A tape of their songs made its way to Bill Ham, the manager of ZZ Top. Impressed with the tape, Ham became Black’s manager; the singer had a contract with RCA Nashville by the end of 1988.

“A Better Man,” Black’s first single, was released early in 1989 and it went to number one — making him the first new male country artist in 15 years to have a number one hit with his debut single. Black was an immediate sensation throughout country music and he played the Grand Ole Opry in April, one month before his debut album, Killin’ Time, was released. Killin’ Time was an immediate hit, going gold within six months and spawning four other hit singles, including the number ones “Killin’ Time,” “Nobody’s Home,” and “Walkin’ Away.” At the end of 1989, he won the Country Music Association’s Horizon Award, as well that organization’s Best Male Vocalist Award. He also won Best Album, Best Single, Best Male Vocalist, and Best New Male Vocalist awards from the Academy of Country Music and the NSAI Songwriter/Artist of the Year Award. By the end of 1990, Killin’ Time sold over two-million copies in America.

In the summer of 1992, Black released his third album, The Hard Way. It received numerous positive reviews and became an immediate hit, peaking at number two on the country charts and crossing over into the pop Top Ten. The first single from the album, “We Tell Ourselves”, reached number one that summer, and two further songs reached the country Top Ten (“Burn One Down” and “When My Ship Comes In”). Black began a lengthy world tour in June of 1992.

Released in 1993, No Time to Kill, his fourth album, went platinum and spawned the number one country hit “A Good Run of Bad Luck” (also featured in the 1994 film Maverick). Four other singles reached the country Top Ten: “A Bad Goodbye” (featuring Wynonna Judd), “No Time to Kill,” “State of Mind,” and “Half the Man.” During the fall of 1994, Black released his fifth album, One Emotion, which also featured a parade of Top Ten hits (including the number one “Summer’s Comin'”). It was followed a year later by the seasonal effort Looking for Christmas. After a two-year hiatus, Nothin’ But the Taillights appeared; both the title track and “The Shoes You’re Wearing” became country chart-toppers. Just before the end of the millennium, in 1999, Black celebrated a decade of recording with D’Lectrified. Several hits collections followed into the new millennium.

In 2001, he created his own label, Equity Music Group, and co-founded the publishing company Blacktop Music Group Inc. with business manager Charlie Sussman and music publisher Mike Sebastian. Over the next nine years, Blacktop amassed a catalog of over 4,000 songs by some of Nashville’s biggest hitmakers. Black returned to recording in 2004 with Spend My Time, his first batch of new material in over six years, closely followed by Drinkin’ Songs & Other Logic in 2005. Black continued to tour occasionally but stayed away from the studio. In 2010, he and his partners sold their publishing concern to the conglomerate Ole, one of the world’s largest independent music publishers.

Black continued writing songs on his own and in collaboration with a host of others, including Steve Wariner, Frank Nicholas, and Bill Anderson. He formed his own label, Blacktop Records (no relation to his former company) and entered into a partnership with Thirty Tigers. In early 2015, he began working on a new project at his home studio in Nashville and at various others in California. The finished product was entitled On Purpose. It featured guest spots from Big & Rich and wife Lisa Hartman-Black and was released in September on Blacktop/Thirty Tigers. He stayed with that label for 2020’s Out of Sane.

With Out of Sane, Black continues to hold firm in making great music that doesn’t fit a mold or conform to current popularity.

“I try to make records that don’t fit into a trend,” explains Clint. “I never wanted to start a trend, and I’m not going to chase a trend, either. To me, a great band will always sound great, today and in ten years. If you listen to this record, it’s not about fitting into today’s country, or yesterday’s country, or tomorrow’s country, it just is.”

The Grammy-winning Country superstar understands that people consume music in the real world; but to create something that endures, a whole lot of lab time is required. Laughing, he explains the album’s title – a lyric from the road boogie “What I Knew Then” — comes from the dual states of mind that come into play with making records.

“I have a studio on my property, so I can walk out there and never finish working because I have this passion for it. But so many hours can drive me insane: I don’t sleep, I’m exhausted and completely consumed. It’s like a radio that clicks on in my sleep, to get up and get back to work. The music comes out of the sane part of me, and the record itself the insane…”

The lead track from Out of Sane is the unadorned piano ballad “America (Still In Love With You). It plays as an intimate song of romance yet serves as a pledge to the fundamental truths and values of the country at a time of incredible divisiveness.

A collection of material that will certainly stand the test of time, Out of Sane, is one of the most personally gratifying albums Black has ever recorded.

“Out of Sane is made up of all original songs, except for one cover. I recorded it with a varied collection of musicians; some from my band and some with session players. I believe it’s one of my best albums ever and I think my fans will love it. They’ve been asking for new music for a while and I’m thrilled to finally be able to deliver after five years since the last studio album,” says Black.

It has been more than three decades since the release of Clint Black’s groundbreaking debut album, Killin’ Time. The genre altering record cemented the Country music icon as one of the truest traditionalists in the game and his widespread influence can still be felt in the works of artists today. Having sold over 20 million records, earning 22 #1 career singles, nearly two dozen gold and platinum awards (U.S. and Canada), a Grammy Award, numerous CMA, ACM and American Music Awards, and being honored with a star on the Hollywood Walk of Fame, Clint Black has had one of the most storied careers in modern music. The Houston-raised musician has certainly come a long way from the Texas nightclub circuit where he first began.