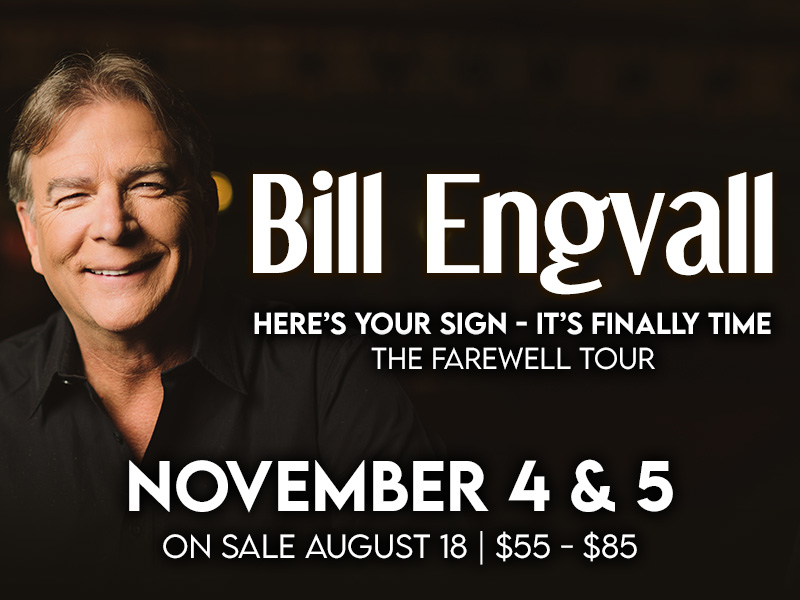 The thing that makes any entertainer successful is the ability to connect with an audience. It’s the quality of sharing the humor in everyday situations that has made Bill Engvall one of the top comedians today – and one of the busiest.

Although he currently resides in Park City, Utah with his wife, Engvall is a native of Galveston, Texas. Early on, he moved to Dallas and was working as a disc jockey with plans of becoming a teacher. While in a nightclub one evening, Bill decided to try his hand at stand-up comedy and quickly found that making people laugh was truly his forte. Soon after, he decided to move to Los Angeles to pursue television opportunities.

First, Engvall appeared in a Showtime special, A Pair of Joker’s, with Rosie O’Donnell, followed by hosting A&E’s Evening at the Improv and appearances on both The Tonight Show and the Late Show with David Letterman. Then in 1992, Bill won the American Comedy Award for “Best Male Stand-up Comedian.”

After appearing in episodes of Designing Women, Bill went on to portray Buck Overton on the ABC sitcom, Delta, starring Delta Burke. Bill also starred in the NBC series, The Jeff Foxworthy Show, where he played Foxworthy’s best friend.

Bill has hosted numerous television shows including the game show LINGO for GSN, Country Fried Videos and Mobile Home Disaster for CMT as well as several award shows. He had a 3-episode arc on the TNT show Hawthorne, made guest appearances on the TNT show Leverage starring Timothy Hutton and the FOX show Last Man Standing starring Tim Allen, narrated a documentary for the Speed Channel on Darrel Waltrip and starred in the Hallmark Channel movie Kiss at Pine Lake.

Bill starred in and executive produced his own self-titled sitcom, The Bill Engvall Show, for TBS, which ran for three seasons. He was one of the stars of the sketch comedy show, Blue Collar Comedy TV, on the WB network.

In 2008 Engvall starred in Bait Shop, which co-starred Billy Ray Cyrus and had its world premiere on the USA Network. Then in 2013, he voiced an animated character in a show for CMT titled Bounty Hunters, and became a contestant on the 17th season of Dancing with the Stars.

A star of the big screen as well, Engvall has also appeared in several films including Strawberry Wine with Christina Ricci, and Bed and Breakfast with Dean Cain, as well as Delta Farce. His latest film, The Neighbor, takes him out of his typical comedy scene and into the horror genre. Bill recently wrapped production on A New Season where he reprises his role of Coach Z, from Catching Faith in 2015. He also had a role in the thriller, Monster Party, where three teenage thieves infiltrate a mansion dinner party secretly hosted by a serial killer cult for the social elite.

Alongside Jeff Foxworthy, Larry the Cable Guy and Ron White, Bill Engvall was part of the enormously successful Blue Collar Comedy Tour concert films, which have sold more than 9 million units and are some of the most watched movies and specials in Comedy Central history. The soundtrack for Blue Collar Comedy Tour, One For The Road, was also nominated for a Grammy Award.

Following the Blue Collar Comedy Tour movies, Engvall was reunited with Jeff Foxworthy and Larry the Cable Guy on the Them Idiots Whirled Tour, which was filmed as a special for CMT and aired 2012. Bill also has several solo specials on Comedy Central including Aged and Confused (2009) and Live (2004), which was certified multiplatinum, 15° Off Cool (2007) and Here’s Your Sign (1996).

Bill’s first album, Here’s Your Sign (1996), has been certified platinum and held the #1 position on the Billboard Comedy Chart for 15 straight weeks, went on to peak at #5 on Billboard’s Current Country Album Chart and reached the Top 50 on Billboard’s Top 200 Album Chart. The single of the same name was ranked #1 on Billboard’s Country Singles Sales Chart for ten weeks, reached the Top 30 on the Billboard’s Singles Sales Chart, and achieved Gold status, which is not a common occurrence in the comedy market. In 1997, Engvall won the “Best Selling Comedy album” award at the annual NARM convention, outselling albums by Chris Rock and Adam Sandler.

Bill’s second album, Dorkfish (1998), was certified gold and had the honor of being ranked #1 on Billboard’s Comedy Chart, even surpassing Jerry Seinfeld’s album. All of his following comedy album releases debuted at #1 on the Billboard Comedy Chart, including 15° Off Cool and Aged and Confused. Bill’s latest comedy special, Just Sell Him For Parts, is currently available on VUDU streaming service.

Bill has written several books, including You Don’t Have to Be Dumb to Be Stupid (1997) and Here’s Your Sign (2005). Most recently in 2007, Engvall penned his autobiography, Bill Engvall – Just A Guy: Notes From a Blue Collar Life.

Chinook Winds Casino Resort utilizes Etix as the official ticketing company for events on its property.  Tickets may be purchased online at chinookwinds.com, etix.com, by phone at 1-888-MAIN-ACT (1-888-624-6228) and at the Chinook Winds Box Office.