Comedy on the Coast – August 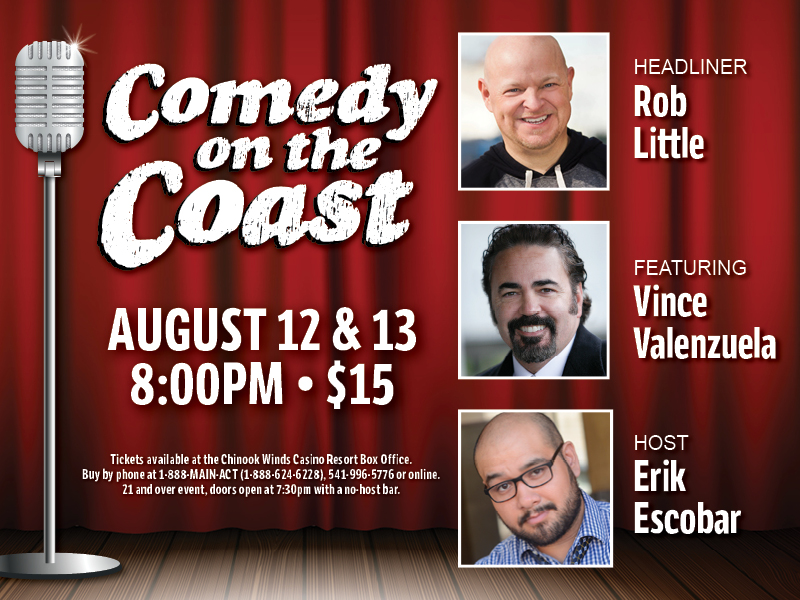 Rob Little’s outlook on life can be summed-up in two words:  Pure Optimism. The ability to see things in a positive light has served him well.  While working in a lucrative position as a computer programmer for IBM, he sent out an ALL-company e-mail that read, “If you aren’t happy here, quit your job and follow your dream.” IBM promptly gave him his walking papers, which was a blessing for Rob and comedy lovers nationwide. Last Comic Standing on NBC agreed and named him “The Happiest Comic in America”.

Having established himself as one of the peak performers in Clubs, Colleges, Cruises, and Corporates within the Country, it’s easy to understand why the Detroit Free press selected him as the “Best up and Coming Comedian,” Campus Activities Magazine named him “College Comedian of the Year,” Carnival Cruise line named him “Top Cruise Line Comedian,” and Maxim Magazine along with Budweiser named him the “Real Man of Comedy”.

Vince Valenzuela’s fast paced, witty, and delightfully edgy blend of “lovable sarcasm and cynicism” keeps audiences laughing across the nation.  With an east coast tenacity and a west coast sensibility, Vince delivers an unforgettable performance-all through his big Donnie Osmond/Eric Estrada pearly-white teeth. He is noted for revealing the hypocrisies, double standards and dysfunction’s of human behavior ranging from his family, ethnic stereotypes, Latino Sensations, antidepressants, Vegans, and of course, relationships!

Vince’s talents as an actor and voice-over artist are widespread.  His credits include co-starring in NBC’s Grimm, TNT’s Leverage, the Indie film Judas Kiss and America’s Most Wanted.  He’s also appeared in a number of national TV commercials and his voice has been heard in many videogames, as well as numerous TV and radio commercials.

Vince has shared the stage with such comedians as Adam Sandler, Bobcat Goldthwait, Paul Rodriguez, Howie Mandel, Jay Mohr and Carlos Mencia.  His stand up gained national recognition from several television appearances including: Comedy Central’s Make Me Laugh and A&E’s An Evening at the Improv, HBO’s Loco Slam, USA’s Up All Night, Si’Tv’s Funny is Funny, Entertainment Tonight and many more.  His CDs DERAINDAMAGED and Verbal Vigilante as well as his latest DVD Vin Shui  have received enormous praise and are played regularly on XM and Sirius Satellite radio. He’s also featured on the DVD’s Latino Kings of Comedy Vol. 1 & 2.  Vince’s traditional, straight, no frills stand-up comedy is what his fans appreciate and what he delivers.  He’s truthful to a T, entertaining, engaging, and if you have to label him, he’s JUST PLAIN FUNNY! 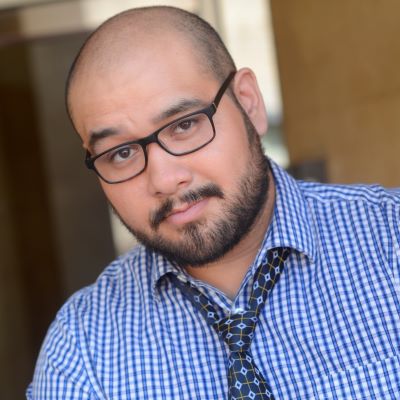 Erik Escobar is a comic, writer, and cheese enthusiast who has performed all over the United States at clubs, colleges, and theatres independently, with the Almost Asian Comedy Tour, and alongside acts such as Rex Navarrete and Jerry Seinfeld. You can catch him on NBC’s Last Comic Standing, Buzzfeed, VH1 and the upcoming documentary: Room Full of Spoons. He is currently a contributing writer for Chubstr and ring announcer for Fist Combat Wrestling. He holds a Masters in Fine Arts in Comedy Theory and Studies from Goddard College and resides in Los Angeles, CA with his shih-tzu, Rancor.